Early 1900s gardens were part of an overall historic restoration project that included the Yawkey House Museum and its outbuildings in Wausau.

A water feature, pergola and sunken gardens were part of the original design, but were deteriorated. There is a rich history for these assets, starting with the original landscape
design done by Morell and Nichols in 1910. Their design brought the focus out into the east yard. There, visitors could view the classic pergola, covered with grapevines and accented with a classical pool and sunken perennial gardens. Other walking paths flanked
the grounds of this Marathon County gem. 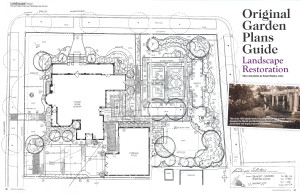 Many of the steps presented here can be applied to homeowners who have historic or period properties, whether mid-century modern, Victorian, or Arts and Crafts. Gardens during those periods had certain kinds of designs and plants, which can be replicated in the landscape or updated with modern cultivars that provide the same look and feel. Anytime you buy or sell your house, it’s a good idea to provide the buyer with any landscape drawings you might have. They help the new resident learn what’s in the
garden.

Before Landscape Solutions could start, a structural report and diagram of the existing site had to be completed. The report compares what exists on site now to what was
originally planned. It was imperative that the new garden design gave
considerations to the original design, while unifying new needs. We
developed a sketch of new concepts to enable the committee to work out
specific needs and raise funds for the project. 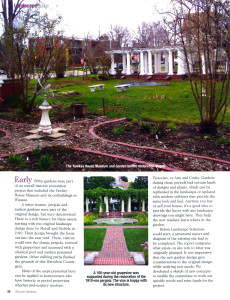 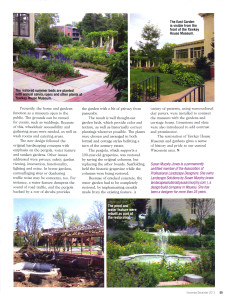 Presently, the home and gardens function as a museum open to the public. The grounds can be rented for events, such as weddings. Because of this, wheelchair accessibility and gathering areas were needed, as well as wash rooms and catering areas.

The new design followed the original hardscaping concepts with emphasis on the pergola, water feature and sunken gardens. Other issues addressed were privacy, safety, garden viewing, interaction, functionality, lighting and noise. In home gardens, camouflaging sites or deadening, traffic noise may be concerns, too. For instance, a water feature dampens the sound of road traffic, and the pergola backed by a row of shrubs provides the garden with a bit of privacy from passersby.

The result is well thought-out garden beds, which provide color and texture, as well as historically corrects plantings wherever possible. The plants were chosen and arranged in both formal and cottage styles befitting a turn of the century estate.

The pergola, which supports a 100-year-old grapevine, was restored by saving the original columns, but replacing the arbor boards. Scaffolding held the historic grapevine while the columns were being restored.

Because of cracked concrete, the water garden had to be completely restored, by implementing moulds made from the existing feature. A variety of patterns, using warm-colored clay pavers, were installed to connect the museum with the gardens and carriage house. Limestone and slate were also introduced to add contrast and prominence.

The restoration of Yawkey House Museum and gardens gives a sense of history and pride to our central Wisconsin area.

We are here to assist and create for our clients outstanding designs that exceed needs by growing more beautiful each year, as well as save money in maintenance, plant replacements, and water.

Because every project is unique, it is best to speak with us directly to give us the opportunity to properly gauge the scope of the entire project.

Landscape Solutions works throughout Central Wisconsin, but we often travel across the entire Midwest to accommodate clients.